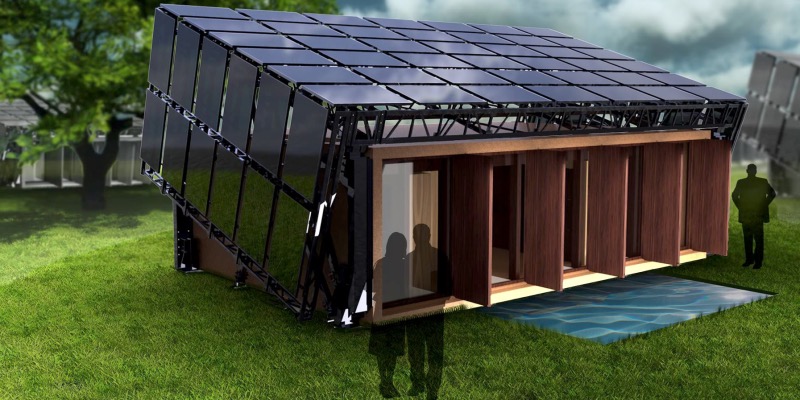 The Home Design That Could Change the Economics of Solar Forever

Turning sunlight into energy would be a lot easier if the Earth weren’t constantly spinning.

Because solar panels work best when they’re directly facing the sun–which happens only for a short period each day–most of the time, a significant amount of solar power falls by the wayside. To help solve this problem, Portugal-based design project Casas em Movimento (Houses in Motion) has come up with a revolutionary design using a rotating house whose photovoltaic roof follows the sun throughout the day, Fast Company reports. The interior of the house even has a section that stays stationary at all times, allowing you change and customize the layout throughout the day depending on how you want to use the space.

Architects are building the first house to use the design in the Portuguese city of Matosinhos. The project’s creator, Manuel Vieira Lopes, professor of architecture at Portugal’s University of Porto, is currently seeking potential buyers for a prototype version of the home. (A home just over 1,000 square feet would cost around 500,000 euros.) To see how the design works, check out the video below.

Casas em Movimento’s solar panels produce about five times as much energy as the house needs, resulting in excess power that an owner could sell back to the utility grid. In the U.S., however, the program that credits solar energy generators for the electricity added back to the grid–called net metering–has taken a hit recently. Last month, Nevada, California, and Hawaii introduced cutbacks that are changing the economics of solar panels on rooftops, MIT Technology Review reports.

Some 20 other states are also considering similar changes, which could make it even harder to reach grid parity–when the cost of solar is comparable to the average price of power from the grid. If consumers no longer receive net metering fees, residential solar power “makes no financial sense,” SolarCity CEO Lyndon Rive recently told The New York Times.

Still, in the long-term, solar power in the U.S. should have a very bright future. An Oxford University study published last month predicts that the price of solar will continue to fall 10 percent per year for several more years. By 2027, solar power should be able to provide 20 percent of the world’s energy needs, according to the study.

The Home Design That Could Change the Economics of Solar Forever 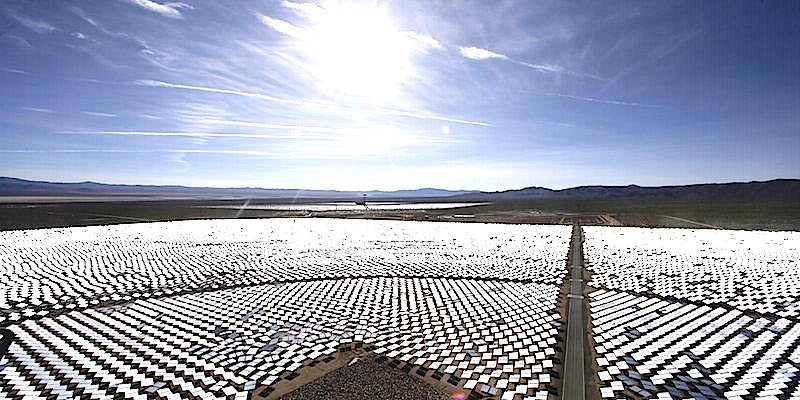 More power from the sun hits the Earth in a single hour than humanity uses in an entire year, yet solar only provided 0.39% of the energy used in the US last year.

Visionaries like Elon Musk think that solar will become the biggest energy source by 2031, according to an interview with Tim Urban on Wait But Why.

But what would a world powered by solar look like?

The Earth would probably be littered with solar panels, right?

If solar is 20% efficient (as it has been in lab tests) at turning solar energy into power, we’d only need to cover a land area about the size of Spain to power the entire Earth renewably in 2030.

This map, from the Land Art Generator Initiative, shows just how little space that really is: 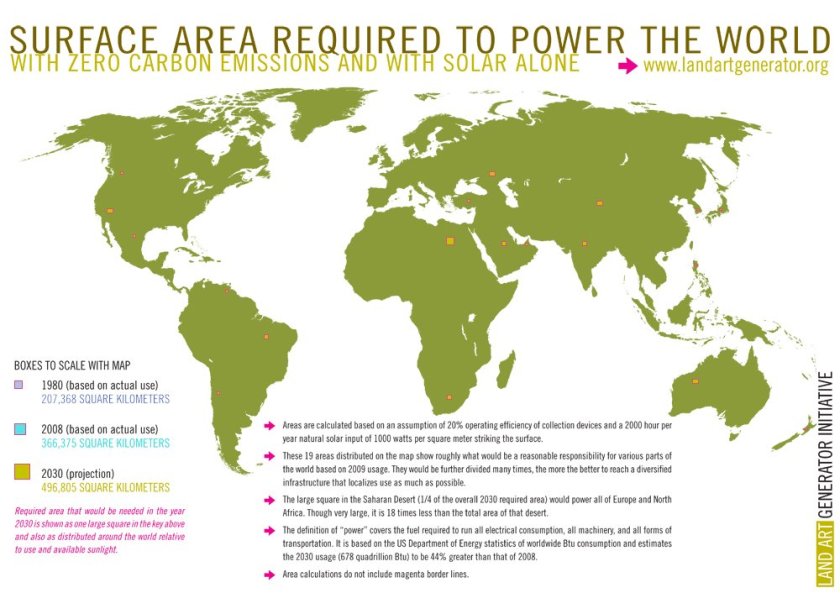 And while it’s useful in the map to show the solar installations as squares bunched together, this area could actually be spread over more space, with solar panels tucked away on rooftops and spread across deserts. 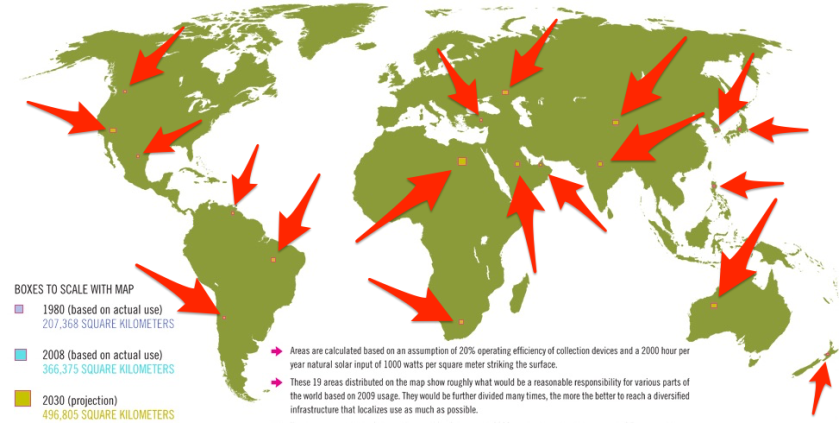 Finding all of the squares.

To figure this out, the folks at Land Art Generator did the following math:

678 quadrillion Btu (the US Energy Information Administration’s estimation of global energy consumption by 2030) = 198,721,800,000,000 kilowatt-hours (simple conversion) divided by 400 kilowatt-hours of solar energy production per square meter of land (based on 20% efficiency, 70% sunshine days per year and the fact that 1,000 watts of solar energy strikes each square meter of land on Earth) = 496,805 square kilometers of solar panels (191,817 square miles) 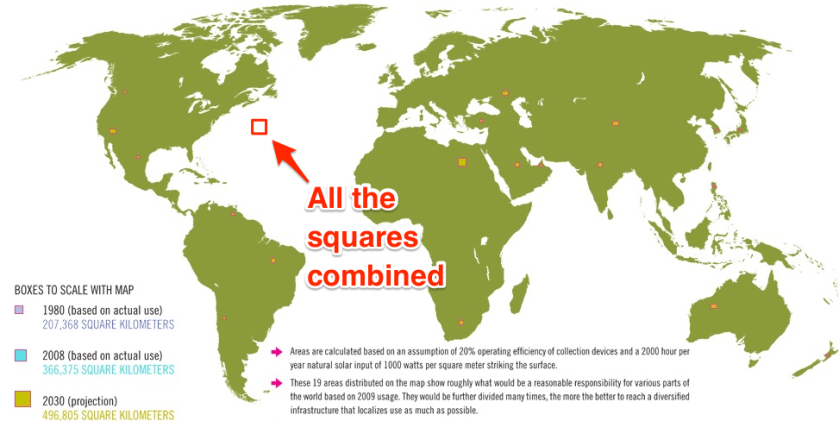 All of the squares are about the size of Spain.

Remember, that’s if we only relied on solar — no fossil fuel-guzzling oil, coal or natural gas. Now we just have to work on making that happen. 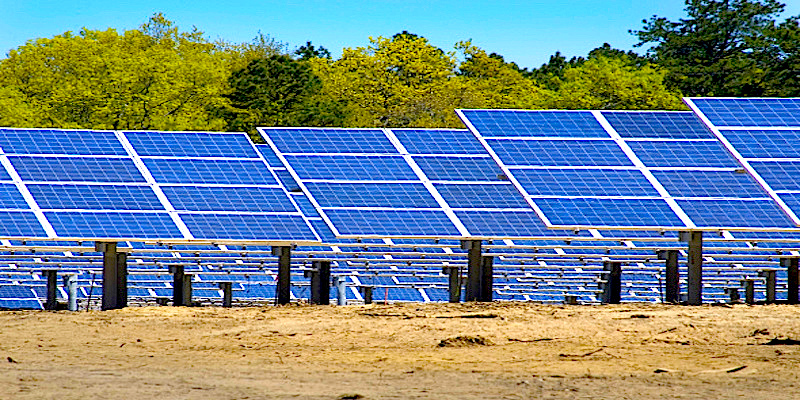 With abundant sunlight and plenty of open space, deserts are an obvious place to put large solar arrays, but there’s a downside: lots of dust, and not enough rainfall to wash it off. A buildup on solar panels can reduce efficiency by anywhere from 7 to 40 percent, according to various research efforts. Cleaning them takes manpower and usually water, which raises costs. Now a handful of startups are aiming to do for the solar industry what the Roomba has done for people who hate vacuuming: Turn the job over to robots.

How to Clean All Those Solar Panels? Get Robots to Do It. 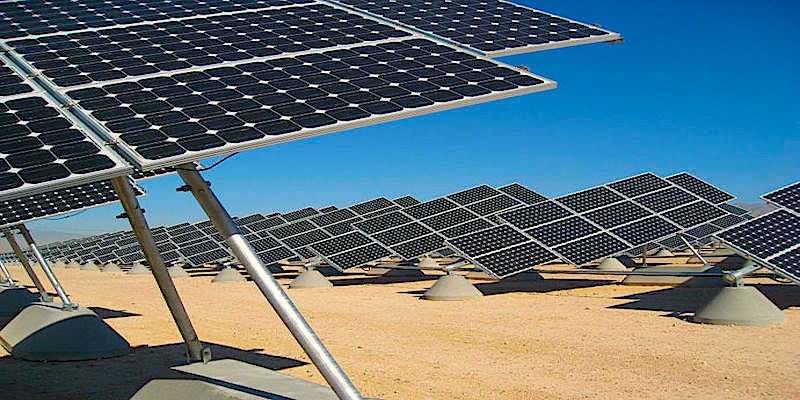 The New Push for Solar Power.