Average Series A valuations have hovered around $15M for the last 9 quarters. Series B rounds have settled into $50M, while Series C rounds have rebounded to $100M. Later stage rounds, however, have fallen by 50% from their high of $400M to just under $200M.

However, in the early stages the frequency of down rounds (e.g., a Series D with a smaller valuation than a Series C) aren’t at historic or even six year highs.

Series A down rounds constituted 40% of all rounds in Q1 2009. Today, that figure has touched 23% and compared to the previous three quarters’ average of 7% is certainly a notable spike. But it’s not a compelling if it’s a single data point, because the market reached this level in Q2 2013 and Q1 2012.

This spike is a reflection of the expensive seed stage market in the last few years, and is likely a reversion to the mean at that stage.

Series B down rounds haven’t increased as a total share. Series C and later down rounds have surged and are higher than recent quarters, but not an aberration when looking at the six year history.

In other words, the fundraising market is quite steady and relatively stable. Prices seem to have found at least a temporary plateau. Down rounds with harsher terms including pay-to-play, recapitalizations, redemptions, accruing dividends and greater than 1x liquidation preferences are at some of the friendliest levels in five years.

Pay-to-play: typically happens when an insider is leading the round, this provision asks other insider investors to participate or suffer heavily dilution. This heavy dilution is colloquially referred to as being washed out.

Recapitalization: restructure the capitalization table for both preferred and common as part of a financing. This washes out the previous shareholders to start again with a nearly-blank slate.

Redemption: an investor can demand the company pay them back the value of their shares at some point in time.

Accruing dividends: The equity investment doesn’t just buy shares, but the investment also receives an annual interest rate that is paid out at the shareholder’s request. Accruing means this amount compounds annually.

Cooley’s data indicates the supply of venture capital dollars exceeds founder demand and VCs are competing by continuing to offer very founder friendly terms, even in down rounds.

Who has the hot hand in venture capital?

To identify today’s top venture investors, CB Insights, a research firm that tracks the venture capital industry, created a data-driven list. The firm based its report on factors like connectedness, since people with access to the best information hear about hot companies first, and exits, meaning the returns generated when a start-up is sold or goes public. For exits, the firm considered the valuation and when the investor first put money into the company.

Investments in start-ups with valuations of $1 billion or more, dubbed unicorns, were not weighted too heavily since many of the gains on those companies have not yet been realized.

CB Insights’ list spotlights the top 100 venture capitalists; we have excerpted the top 20 here, along with a selection of their deals.

There are 74 private US companies valued at a billion dollars or more, according to the CB Insights real-time unicorn tracker.

Based on data analyzed, these are the investors that have backed the most unicorns and are in the best position to capitalize should these companies manage to exit for the valuations they’re receiving in private markets. 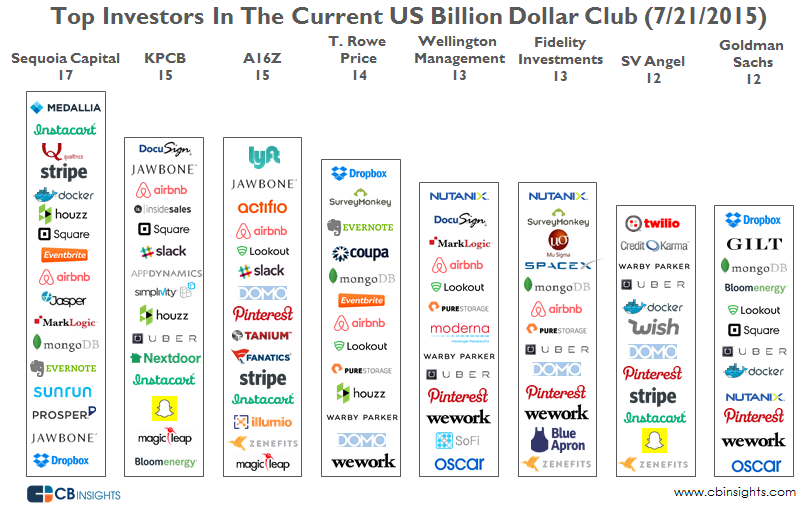 These Investors Are The Best Unicorn Hunters

Silicon Valley insiders are taking advantage of soaring values for technology startups by creating a potentially lucrative side business.

Venture-capital firms along with a cast of prominent entrepreneurs and executives, have each raised tens of millions of dollars for impromptu funds that take a direct stake in a single startup.

These funds, which often come together in a matter of days, give institutional investors, friends and business associates exclusive access to highflying companies. The funds also let the venture capitalists invest far more money in a company than they otherwise could. In many cases, the funds are blessed by the startups, which see them as a way to raise big sums quickly.

Entrepreneurs and venture capitalists have done their best to resist or reduce Wall Street’s entreaties, but it appears that a new relationship has begun to develop, leading to new fund-raising methods and innovations.

Hot private companies are getting more valuable, often as much because of market conditions as actual company performance.

Several private, venture-backed companies have achieved rapid and extreme valuation mark-ups. This has obviously been going on for some time now in Silicon Valley and the private tech sector, but the magnitude and frequency of the recent write-ups has given me pause. Trying to piece together the ingredients that are creating this environment, it comes down to the following: Scarcity, momentum, FOMO and gains.

Why private, late-stage valuations are skyrocketing

The number of active seed venture capital investors jumped to a new high in 2014, rising 23% from 2013’s total. See who they were.

While huge valuations and funding rounds dominated the headlines in 2014, it turned out to be another huge year for seed-stage venture investing. According to CB Insights data, the number of active seed venture capital investors jumped to a new high – up 23% from 2013′s total.

The rise of micro VC funds has helped contribute to this trend, but it’s not just the small guys getting busy. Khosla Ventures, which ties for 9th based on seed activity this year, is looking to raise a whopping $400M seed fund according to filings.

Corporate venture capital boomed once again last quarter led by top investors Google Ventures & Intel Capital, and large rounds of financing for the likes of Flatiron Health and Anaplan among others. In Q2’14, CVC investors participated in $4.02B of financings across 187 deals. On a sequential basis, this represented 34% growth in financings and 45% growth in financing transactions. Compared to the same quarter last year, CVC funding more than doubled the $1.73B of funding in Q2’13.

Highlights from this quarter include: 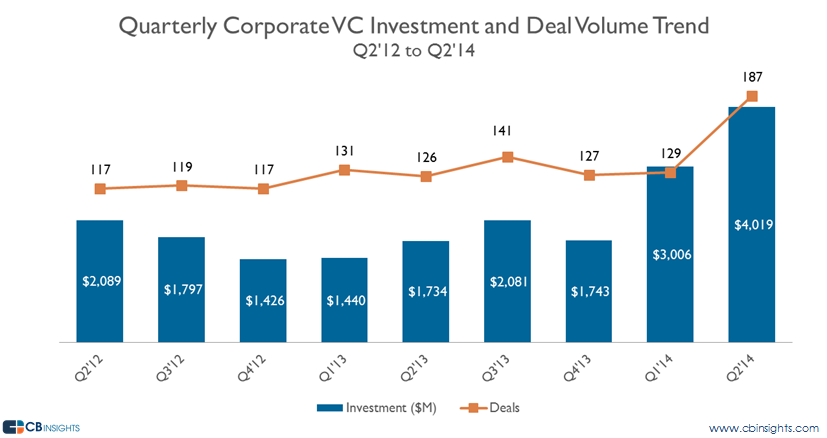 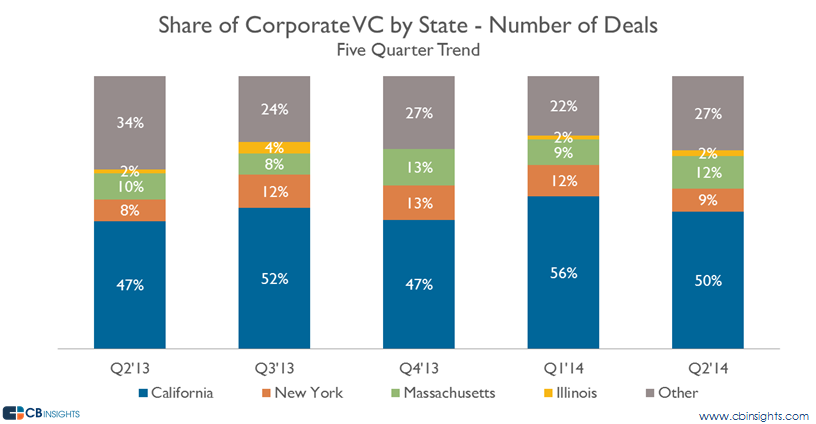 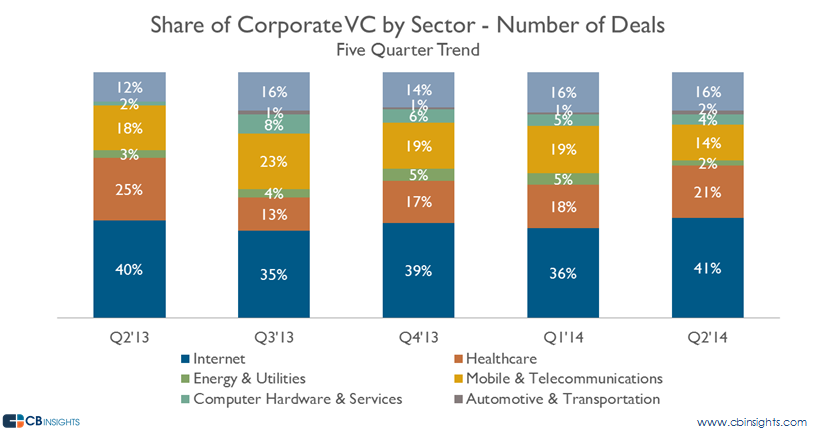 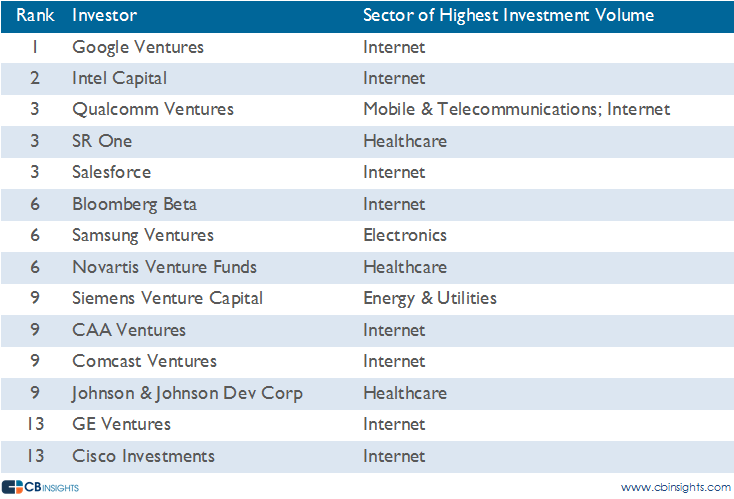