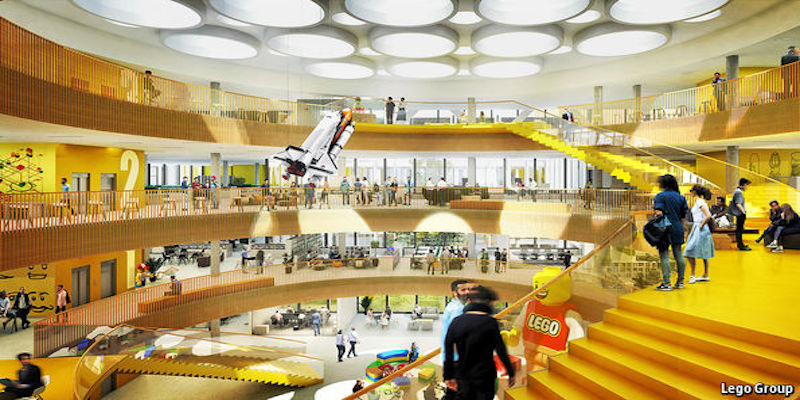 Putting on the glitz

Everyone wants buildings as trendy as those of tech firms.

Picture a set of Lego that covers 50,000 square metres (540,000 square feet), costs over one billion Danish kroner ($150m), and has a mini-golf course on its roof. In reality the new global headquarters of the Lego Group will be of real bricks and concrete, but its boss, Jorgen Vig Knudstorp, describes it with childlike glee. It will rise up in Billund, in rural Denmark, he says, as “a great facility, not opulent, very playful, for children too.” “People house” will be a totem of the firm’s success.

Mr Knudstorp is allowed to brag. The toymaker’s annual return on invested capital has topped 100% for each of the past eight years. Pre-tax profits leapt by 28% last year and sales are buoyant. His “stick-to-the-brick” strategy has done handsomely, after an earlier crisis. Warner Brothers makes and owns brand-boosting Lego movies and others run Lego-themed parks, leaving him to sell toys. After years of recruitment, he says the 4,000 staff in Denmark have outgrown their offices.

Getting a glitzy new building with an indoor prairie, open space and bright yellow staircases is a fine way to celebrate. The design is packed full of fads common to others’ new headquarters: staff who get “hot desks” to share, not their own workspaces ; a big atrium and lots of glass to suggest a transparent firm culture and not much hierarchy; space for exercise plus lots of green features, notably low energy use.

That will sound familiar to others. Last month Siemens’s boss, Joe Kaeser, unveiled a pricey new corporate HQ in Munich, and has described it as a place where encounters occur. Airbus, too, just cut the ribbon on its “Wings Campus”, a new group head office in Toulouse. A big canteen, fitness centre and “collaborative office space” are supposed to get staff talking. Tom Enders, its boss, claimed it all shows his firm is “open-minded, innovative and future-oriented”. Meanwhile Adidas, which makes running shoes, is splashing over €500m ($550m) on a head office in tiny Herzogenaurach in Germany. It insists the design will ensure workers’ “spontaneous interaction”.

Big, old firms try to package themselves as nimble and open because they have to compete ever harder for talent, including against tech firms. Mr Knudstorp frets that in ageing Europe, labour markets will grow ever tighter for skilled designers, software engineers and others. Offering them a career in a windowless cubicle won’t do. Luka Mucic, chief financial officer of SAP, Europe’s largest software firm, notes a change of attitude among recent graduates, saying recruits care less than previous generations did about status and title. They want to know about a firm’s “vision”, and whether it has “an environment where they have a sense of choice”, he says.

Whether non-tech firms can really win in a battle of the buildings is another thing. Apple is spending an estimated $5 billion on its new flying saucer-shaped campus in Cupertino, California; nearby Google will erect such futuristic headquarters that one website calls it a “spiderweb canopy utopia”. Amazon, not to be outdone, is putting up tree-filled “spheres” in downtown Seattle so staff can hold meetings in forests. For European firms in out-of-the-way company towns such as Billund or Herzogenaurach, it might be hard to compete, however appealing the minigolf course.

Putting on the glitz